I aim to have these posts already written by Friday night, though as long as I get them out by the end of Saturday, I feel okay about it. Right here in the Old Testament, these books can feel really dry because of all the regulations, but there are some interesting pieces about Numbers.

I also have been seeing multiple bloggers write up posts with scriptures from Numbers, which I feel is God telling me this week’s post is on the right path.

That’s right, we have finished Leviticus (Pt. 1 & Pt. 2), and the next book of the Bible that follows is Numbers.

Consisting of 36 chapters, Numbers is known as the book of wandering. The two wanderings being Mount Sinai and the plains of Moab.* What was only supposed to be a short journey or ELEVEN DAYS…became FORTY years!

Overall Message: We will have to go through our own journeys, but we do not need to complain and linger (live) on the journey. We are meant to reach the end goal, not sit down in the middle of the race.

The first word of Numbers, in Hebrews, means “And He Said,” but Jewish writings tend to focus on the fifth word which means, “In the Wilderness.”

Numbers referring to wanderings, as stated before,  contains two sets of numbers (groups).

1st: The generation of Exodus, due to their complaints and unbelief could not join the Promise land.

2nd: The generation that grew up in the wilderness, and later conquered Canaan.

Ch. 1 – Moses and Aaron take a census of all the people, while in Sinai, except those of the Levitical bloodline. As we learned in the previous book, Leviticus, the Levities were the bloodline of the priests. Through this census, a long list of family names are given, some you will immediately recognize.

Ch. 2– The men bearing family names then become the leader of each family grouping. The group near the leader then becomes that man’s army.

Levities Set Apart As Firstborn and Their Duties

3:14-39– The various families of Levi are listed. Each family has a different set of jobs they need to perform.

3:40-51– The firstborns of Israel are counted, and the Levites are selected to take their place. As the children of Israel outnumber the Levites, anyone who was remaining, and not represented by a Levite, was told to give five shekels to Moses. The redemption money collected would go to Aaron and his sons.

Ch. 4- Duties of the various families of Levites and census

-Confession and Restitution for those who sin

Ch. 6:01-21– Apparently becoming a Nazirite is kind of a big deal. A man or a woman could take a vow to become one, it signified they would separate themselves from God.

Ch. 7- Offerings the leaders must give. The list is long, this chapter consists of 89 verses.

-How the lampstands needed to be arranged

-lamps made out of gold

8:05-26- Cleansing and Dedication of the Levites

Fun Fact: 8:02– Seven lamps will give light in front of the lampstand. Wonder if this the beginning reference to the lampstands in Revelations?

Ch. 9– While in the wilderness of Sinai, the Lord commanded the children of Israel to have Passover at the appointed time. Two men became defiled because of a corpse, and because of that, they were not able to give offering on Passover. They came to Moses with the desire to give an offering and the question of why they are kept from the offering.

God answered that whether away or defiled on the Passover, the person may still keep the Lord’s Passover.

Should someone not keep the Passover and is clean, and not on a journey, he will be cut off from the people. 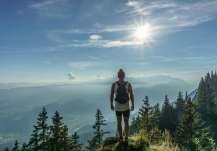 Ch. 10:01-10- Two silver trumpets were made before the departure. When one has blown, the leaders of the armies needed to gather, but when both were blown all the congregation of Israel would gather. Sounding the alarm during the time of war was a way God would remember them, and they would be saved from their enemies.

But unfortunately, this is where the promise for the generation of Exodus ends. For complaints are coming again, and God will not tolerate it.

See you next time!

What do you think of Israel disobedience to God?

Do you ever complain to God?