Err…that’s quite a title isn’t it?

In a number of comments, I’ve briefly touched on my first testimony. But it wasn’t till I read a post by Teen, Meet God that I felt it was finally time to talk about my testimony.

I see teen bloggers like herself, and I am reminded of how God reached out to me when I was a teen. A time when I told myself, “When you are older, don’t forget how you felt, and what you went through, so other teens (especially girls) don’t feel so alone.”

Of a time when I was beginning to have friendships that would last years, and I didn’t know just how toxic they would become. A time I would lose my self esteem, and my confidence would be shattered. But I wasn’t alone. God, Christ, and the Holy Spirit were right there with me. And yet, I wanted something stronger than that, stronger than knowing.

One year before my calling, before the dreams appeared.

This is my testimony of the beginning. When the desire to draw closer to God and becoming sanctified started. 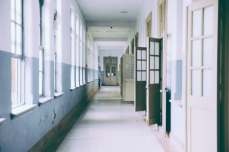 When my class of eleven students left behind the 5th grade at our old elementary school, we entered the middle school building.

It was a huge change. Going from a very small class to about 100 students.

I understand these numbers are still very small in comparison to some of you of course, but I was from a village. 🙂

6th grade was when I became best friends with a girl who would use my friendship to her advantage. She would ditch me for the more popular friends. She would get angry at me easily. I didn’t know that then.

But she is one of the main causes of the drama that happened within the first few months of being at school. There’s a scripture that says God will use everything in our lives for His good (Romans 8:28), and I can say, He keeps His promise.

It started with a rumor she told me.

“People have been finding pieces of paper with handwriting that looks like chicken scratch. Apparently, the pieces of paper have threats on them. Different girls are being targeted in the notes.”

Then…one Wednesday night, right before church, she told me on the phone.

“So…I don’t know how to tell you this…but…one piece of paper was found today.”

My heart and lungs felt like they dropped to the bottom of my stomach when she said, “Your name was on it, saying you would be stabbed with a knife.”

I remember leaning against my door and sliding down towards the carpet. I had never thought something like that could happen to me. I didn’t understand why either. I wasn’t that outgoing. I didn’t know a lot of people. Why me?

She gave me a name of a person she thought who wrote it, then we hung up. I’m not sure why I didn’t tell my parents. I’m not very open about things that trouble me. But I did know I didn’t trust mankind. There was nothing no one could tell me in that moment (Christian or not) that would be good enough to fight against my fear.

I turned to God. I remember asking Him for something. Give me anything.

Minutes went by. Nothing.

I keep thinking about Jacob in the Bible. When he wrestled with Man, and it wasn’t till he was granted what he wanted that he let go.

Moving to a different side of my bed and holding my hands tightly together, I knelt my head. Silent prayers from moving lips.

Several minutes went by, nothing.

My body was cramping up. My legs both were entirely numb.

But I didn’t care. Tears streamed down my face, and my body shook.

“I don’t have anyone else except You. I can only trust You. I’m not letting go until You show me You are with me! PLEASE GOD!”

Immense heat flooded throughout my entire body, like a gentle shock.

Warmth radiated around both of my shoulders.

It felt like two strong hands had been placed. One on each shoulder. Like Someone was right behind me. His hands resting on my shoulders letting me know, “I’m right here with you. Why are you so afraid?”

I cried out to Him in faith, and He answered. He was with me. He would be with me.

That was the first time I believe I felt the Holy Spirit.

The next day, the drama continued. My friend talked to the girl who was the one “said” to have written the paper threat. It was between my friend and her, I wasn’t part of anything. Then, before the next to last class period started, I was handed a note from the girl.

In her note, she said she didn’t do what was said of her. But at the very bottom of the note, boldface, angrily, she told me to keep my mouth shut. This was the only legit piece that I knew to be entirely true. And it was clear she was threatening me, at least in this note.

Fear did shake me but encouraged and strengthened by God and knowing He was with me, I prayed for Him to continue to walk with me.

I requested to my study hall teacher, yep how planned out was that (that’s the power of my God!), for me and my best friend to go see the principle. My teacher looked extremely surprised to hear such a request, but he obviously granted it.

I told the principal what my friend told me, I gave him the letter. I told him I wasn’t accusing the girl of something I didn’t see. I don’t know if it was true. All I knew was there was a bad rumor going around, and that she threatened me in her note.

My principal was a blessing and a Godsend. He stood in front of the doorway to the office we were in. He told me, “If anyone wants to get to you, they’re going to have to go through me.”

My friend was told to stay behind, and I was allowed to go back to my class.

I saw two adults get the girl out of her class because they all walked out in the hall, and our classroom door was opened.

My mom got a call, and that day she took me out to a park to talk about what happened.

In the aftermath, the girl was found with a knife in her locker. I will say, we live in a country where a lot of people hunt, have pocket knives. Nonetheless, it’s against school policy, and she has had some problems in the past. I don’t know all of the details, but she was relocated to a different school.

I’m not saying she was the one behind the rumored “threats.” But after that day, the rumors did stop. No other notes were said to have been found.

I didn’t live in fear and dread because of God. He encouraged me to do what was right. He allowed the right people to be there. He protected me.

Over a year later, the summer I was 13, I wanted to have that closeness with God daily. I wanted to feel the Holy Spirit. I began to talk to Him daily. Sometimes, things were as simple as, “Hey God, You see that sunset? Yeah, it looks awesome. Great work.”

Gradually that summer, as I drew closer to God, I felt Him closer to me. When I feel the flood of the Holy Spirit now I think back to when it all started on that day.

(NIV) Romans 8:28, “And we know that in all things God works for the good of those who love Him, who have been called according to His purpose.”

Please consider writing about your testimonies on your blog, and sharing them whether on your blog or in person. 🙂

Glory Be To God